About a year and a half ago, I was riding in the truck with my boss traveling to a field site to sample some fish or another. During our conversations, the fact came up that the 2017 AFS (American Fisheries Society) Annual Meeting was going to be held in Tampa Florida. Florida is right up there near the top of my wish list of places to fish, so I calmly and casually volunteered (half as a joke, not really expecting to go) to attend the conference and present our research there. Editor's note - I believe what was actually said, was something to the effect of my being willing to give my left arm in exchange for going. We usually go to conferences every year, and I've been to several other AFS meetings in the past, but I'd never gone to one quite that far away before. I wasn't really expecting to go, but I put that wish on the back burner for the time being.
Several months later, while reviewing our project budgets, I noticed that my boss had added the conference attendance to our planned budget for the year (best boss ever!). I calmly didn't freak out, and tried to play it cool. Anyway, long story short, I submitted an abstract so I could give a talk at the conference, and as the time drew nearer, and hotels were booked, and plane tickets were purchased, I finally allowed myself to accept that it was going to happen!
So it was that in the latter half of August 2017, I found myself stepping off of an airplane in Florida! I of course immediately began sweating. It's hot there. More on this in a bit.
I've always enjoyed attending AFS meetings. It's one of the ways that biologists from across the country connect with one another, and learn of the fisheries research being conducted all over the world. Basically it's like the world championships of fish nerdiness. For four straight days. Plus it was air conditioned inside the conference center which I appreciated. I won't bore you with more details about the conference, since this is a blog about fishing after all, but if you want to learn more about AFS (and I encourage you to do so), you can visit their website: https://fisheries.org/. I've written similar blog posts about my trips to AFS conferences in Seattle WA, St. Paul MN, and Little Rock AR as well if you're really bored.
As for the fishing portion of the trip, my days were tied up in the conference, but I would have the evenings free to explore and catch as many new species as I could. For somebody like me who has never fished in Florida before, I fully expected those few hours per day to be like drinking from a fire hose.
The view from my hotel did not help to calm me down when I got there.
So I grabbed my poles and hurried down to the nearest pier-shaped thing I could find, cast out my hooks, positively quivering with anticipation, and proceeded to catch.... nothing. The fish gods do not like it when you get cocky. So all I caught at the first spot I tried was a piece of humble pie. I regrouped, and found a Publix grocery store a short hike away, so I went and stocked up on shrimp. Also, if you're wondering, yes people do look at you funny if you're a sweaty out-of-towner walking around a grocery store with all your fishing poles and tackle boxes.
One helpful fellow at the grocery store pointed me toward a nearby bridge, where I was greeted by my first manatee sighting of the trip. The shrimp was a good call, and shortly after arriving, my pole nearly got pulled into the water. It is very satisfying to hook a fish knowing that no matter what it was, it would be a new species; that does not happen very often. The first fish to kick things off was the hardhead catfish.
I found plenty more catfish that evening, but no other species were added despite rumors of sheepshead and redfish being there also. Interestingly enough though, I'm considering filing a complaint with the Old Spice Deodorant people. Knowing how hot and humid it was likely to be in Florida in August, I planned ahead and bought deodorant that was clearly labeled "Sweat Defense" right on the front. Surely that would defend against the sweat right?
The next evening, my buddy Zach (who was also attending the conference) and I arranged to meet up with my new buddy Ryan, a local Tampa Bay resident species hunter. Ryan, who also has a fishing blog (see http://fishihavecaught.com/ for details), was the perfect guy for the job. Most people just don't get the same thrill of catching new stuff that we do. It's always refreshing to fish with like-minded people. We met at one of his go-to spots for people who want to add species, and it was an instant success. He had caught it all before of course, but it was all new to me. We began casting sabikis tipped with shrimp and my first bite came within about 10 seconds. This was the Florida I was hoping for! The first fish I pulled up was a mangrove snapper.
Then I did something I've never done before. I pulled up two fish at once and they were both new species!

I rounded out the evening by adding two more to the list: the white grunt and the lane snapper:
That was it for my species that night before we got rained out by one of the frequent thunderstorms that rolled through the area; but we saw a few other species caught including spottail pinfish, a sea-robin of some sort, puffers, porgies, and even a baby gag grouper. Seriously, Florida is the promised land for species hunters, especially ones from the other side of the country that haven't been there before...
The next couple evenings, Ryan was busy, so I was on my own. I tried a couple different piers and caught some more stuff. The hardhead catfish were ever-present, and these would become the resident pest of the trip. 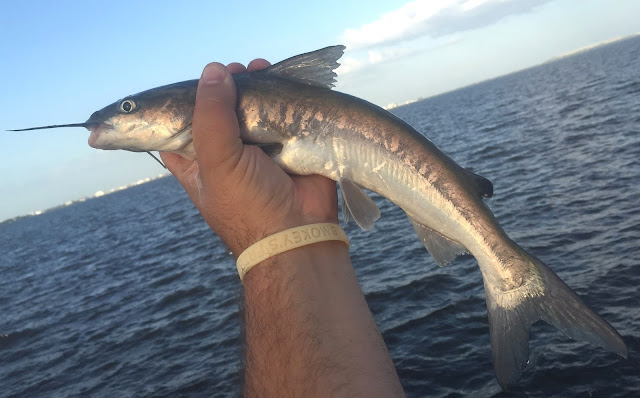 I've caught many catfish before, and I've handled many thousands of fish in my life, so I assumed I knew what I was doing while handling the catfish down there too. However, as I mentioned earlier, the fish gods do not like it when you get cocky, and they're quick to call you on it.
As I was unhooking one particularly feisty hardhead catfish, I zigged when I should have zagged, and ended up with his pectoral spine firmly lodged deep in the middle of my palm.
One local onlooker suggested that I sleep that night with my hand firmly pressed on a nice juicy steak. It hurt, but there was no need for quite such drastic measures. Apparently I was lucky I didn't stab myself with the other common catfish species (which I finally caught shortly thereafter), since the gafftopsail catfish are not only every bit as sharp and poky, but they're venomous as well.
Other exciting list additions included the Atlantic spadefish, not to be confused with the Pacific spadefish which is found in the Pacific; and the southern puffer, not to be confused with the northern puffer, which is found more to the north.
I was chased off the water yet again, but some ominous looking thunderstorms.
That brings us to the last fishing opportunity of the trip. Ryan had another promising spot to try but the thunderstorms were rolling through more frequently that afternoon, and we weren't sure if we'd be able to fish safely, you know without getting struck by lightning and all that. We decided to risk it and see if we could get on the other side of the storms.
We pulled up to his spot, and there was a small break in the clouds, but the there were still ominous rumblings from some uncomfortably nearby thunderheads. We weren't sure how long we'd last, but we had to give it a try. We were greeted at the dock by a variety of bait thieves:
I had been fishing with two rods all week. One rod had a sabiki rig on it to catch the smaller species, and the other was a bigger rod that I had been baiting with whole frozen squid or small fish in the hopes of a tussle with something bigger. There are several species of shark commonly caught there, and I wanted one! The smaller rod had done a fair bit of work all week, but the big rod seemed to be on strike. In fact, it had refused to get any bites at all. But you can't catch them if you don't try, so I kept on trying.
In no time at all we both began bringing in fish on our sabikis, including a new species, the tomtate grunt:
The pinfish were ever present as usual. Not being one to miss an opportunity, when I pulled up a particularly tiny (bite size) one, I swapped out the old bait on my bigger rod for this more lively offering:
Another group of species very high on my wish list were the filefish. I thought I spotted some poking around the pylons underneath the dock, and was desperately trying to get them to come back so I could get a closer look. I was so into this that I almost didn't notice the tip of my big rod twitching a bit. I tried to play it cool as the twitches got more enthusiastic, and even managed not to jerk the circle-hook out of its mouth! I didn't know what I had, but it was obviously bigger than anything else I had caught. It felt heavy but sort of sluggish. Maybe a ray of some sort? We threw out guesses but we were both surprised to see a perfectly sized baby nurse shark pop up to the surface! I say perfectly sized, because my "big" rod was one of my salmon fishing rods (i.e., not really all that big... but the biggest I could get on the airplane), so a full grown nurse shark would have spooled me without hesitation, not to mention getting it up on the dock; but we could handle this little guy just fine!
I was sure glad we decided to brave the threat of nearby thunderstorms. We stuck it out for a bit longer there, but nothing else new was caught. With about an hour left, we decided to try one last spot. We didn't catch anything new there either, but the sunset, complete with more dolphins and a manatee sighting, made for a perfect ending to the trip. 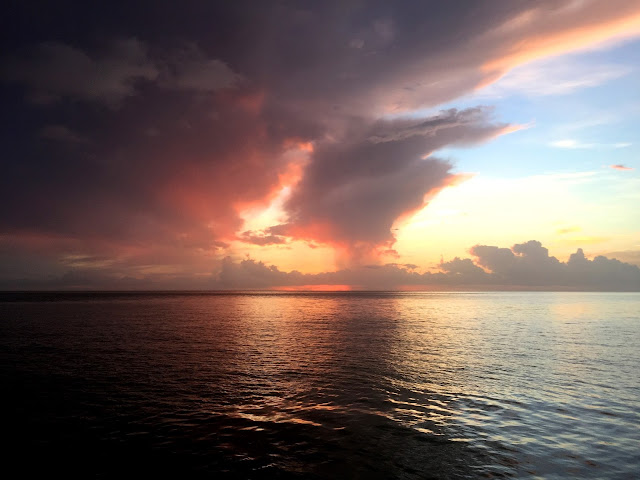 The good news is 11 new species were caught, making it my most species rich trip ever; pretty darn good for only having evenings to fish! But the bad news is; now I've seen Florida, and I know what fishing is like there. Now I'm going to need to spend about a month there getting all the species that I missed out on, no matter how sweaty it gets. I don't know when that'll happen but maybe someday.