Our family vacation this summer took us to the great state of Ohio to visit Mrs Bryanlikestofish's parents. We have been there quite a few times before, but somehow I had never brought along a fishing pole.  I was however well aware each time that there were dozens of species to be had there, as most of the native stuff would be new to me. As we planned our trip, it was suggested that I bring a fishing pole and go species hunting for a couple days. Not being one to argue with fantastic ideas like that, I packed up my travel rods and began making plans and a wish list of species to chase.

At the very top of my wish list and priority #1 was the Bowfin. These fish are an evolutionary relic from the days of the dinosaurs, and are the sole surviving member of the taxonomic Family Amiidae, and even of the Order Amiiformes. They have sharp teeth, and are aggressive biters (see also - the perfect fish). They get somewhat of an unwarranted bad rap with traditional fishermen as a "trashfish", but to this day I can't wrap my head around that one.

Other most wanted species (in order of priority) included Warmouth, Creek Chub (because I assumed it would be an easy one to knock off), and Flathead Catfish, though I sort of knew the flathead might be a long shot. But you can't catch em if you don't try.

Often when traveling to new places, I gather intel on fishing spots to try by talking to other lifelist fishermen who are often more than willing to help out a fellow angler. This growing pool of friends includes folks on Roughfish.com, or various species hunting Facebook groups. However on this trip, I hadn't come up with much at all, so I decided to try and scout out some spots using a new (to me anyway) method, an app called FishBrain. I won't try to give a comprehensive review of the app, as most of it doesn't really appeal to me. However it does have a very useful feature where it provides a map with hundreds (probably thousands; I didn't count them) of fishing spots across the country. When users of the app upload pictures of their fish, they can tag each location. So this allows you to see pictures of what has been caught at each location. Disclaimer here: an alarming proportion of the fish uploaded on this app are not even close to correctly identified, which bothers me to no end, but as long as I ignored the words and just looked at the pictures, I could get an idea of what species I was likely to encounter at each spot.

So with several FishBrain scouted spots picked out, I headed out with high hopes of a Bowfin, and possibly two or three more species if I got lucky. Of course the first creek I stopped at, also the most promising for a Bowfin, was completely blown out and high and muddy. I drowned a few worms anyway, but to no avail. The next spot was more clear, and I could see some small fish darting around. Most of the minnow species in Ohio would be new ones for me, so, not being one to pass up an opportunity at a new "micro" species, I pulled out the small hooks and quickly brought a few to hand.

I kept a few shiners to use as cutbait, but decided to head to some of the other spots I had scouted out on FishBrain. This was when I realized a key difference between Ohio and the western states I am used to. It became immediately clear that public land was quite limited there. Many of the spots, were private property, or pay/member-only lakes. So after seeing more of the countryside than I wanted to with nothing to show for it, I decided to backtrack and try and find a backwater or something to fish in the first creek I had tried that morning. It was of course still very high and muddy, but I found one possible spot out of the current. I figured if I were a fish living in there, that's probably where I would be waiting out the flood. And surprisingly enough, the plan worked. The bites came quite steadily for the next couple hours, all black bullhead.

I toyed with the idea of moving on as I caught bullhead after bullhead, but I was out of other Bowfin spots to try and I didn't want to give up on the main target of the trip. Luckilly I didn't have to wait too long, as I soon had hooked into a fish that actually fought back. I held my breath as I snaked the fish through the weeds and up onto the bank. I don't think I breathed until my Boga Grip was firmly attached to it's bottom jaw. Target #1 achieved!

With my main target achieved, I decided to move on to some of the other species. The next spot I owe entirely to FishBrain, as it was clearly on private property, but in the location description on the app, a note was left by the landowner giving permission to access a particular little creek via a spot on his property. I decided that was good enough for me. I expected Creek Chubs at this spot, but not necessarily anything else. I'm used to western streams, where if you find minnows, they are usually mostly one or two species. When I got down to the tiny stream which was small enough to jump across in spots, I could see little "Creek Chubs" swimming around. And sure enough, I pulled a couple out and they were indeed Creek Chubs.

Another main target down! At this point I was feeling pretty good about the trip. I had added two species in a single day, which is a good day! Plus there were some nasty rain clouds right next door and heading my way fast. I ALMOST decided to pack it up and head to the next spot, which in hindsight would have been a huge blunder. Just out of curiosity, I decided to walk around a bit and catch a few more of the "Creek Chubs" to see if I could get a big one or something. Then my favorite thing happened: I pulled one up that looked a little funny! Then another! As it happened, they were not actually all Creek Chubs. I would end up adding four more additional species just from this one tiny little trickle of a stream.

By far my favorite fish of this little creek encounter though, was my first darter species ever. Darters, for you non-species hunting folk, are a very diverse group of tiny and often brightly colored fish in the perch family. Because of their color and their diversity (there are over 200 species of darters in the US; 22 in Ohio alone) they are quite popular among species hunters, but I had never even seen one in person (they live mostly in the eastern half of the US), so I didn't really quite understand all the hype. However as I stood there huddled under a tree in the rain holding this brightly colored male Rainbow Darter, I immediately understood.

After catching an unexpected number of species out of the creek, I reluctantly decided that I really did need to move along. The next target: a Warmouth. I have tried for these unsuccessfully in Washington, Wisconsin, Minnesota, Arkansas, and Oregon, but according to the pictures I was seeing on the FishBrain map, this next little lake I was headed to offered the best legitimate chance I had seen to date. I could see little sunfish cruising around the shallows basically as soon as I got to the lake, and it didn't take long to start catching them. I put on a tiny jig and tipped it with a fleck of worm and sorted through a couple dozen Bluegill and Redear sunfish before deciding to try a different tactic. I put on a small swim bait, my favorite rig for jumbo Crappie. This resulted in much fewer bites but I got a couple darker looking fish to follow. I walked around the lake and cast around a promising looking submerged log. I got hit, and it wasn't a Bluegill or a Redear!

Looking at the above fish, I first thought I had my Warmouth, but the more I looked at it, the more I doubted it. Sunfish (Warmouth included) are notorious for hybridizing, and I suspected that was the case with this fish. I consulted some knowledgeable folks on Facebook and the consensus seemed to be that this was likely a Warmouth x Green Sunfish hybrid. So I guess it was half of what I was looking for. But I don't count hybrids as species, so the hunt had to continue.

Luckily I wouldn't have to wait too much longer. I continued my lap around the lake, and spotted another dark colored fish near another submerged log. I cast past it and reeled back to the fish. I paused near the fish and twitched it and my jig disappeared! I set the hook and quickly brought in the following fish, which was clearly a Warmouth with all the correct facial markings, flank coloration, and patterning!

At this point I was beside myself. I had just caught my seventh new species of the day! My previous best day ever was 5 species in Florida in 2017. I did not expect this from Ohio, but I was certainly pleased! I decided to try to really swing for the fences and see if I could track down a Flathead Catfish as dusk approached. That would have really been the icing on the cake. But it was not to be that night. This was one of those times where the fish gods pat you on the head and tell you to calm down. But I did find another cool spot and catch a few spunky little Channel Catfish; not a bad consolation prize. 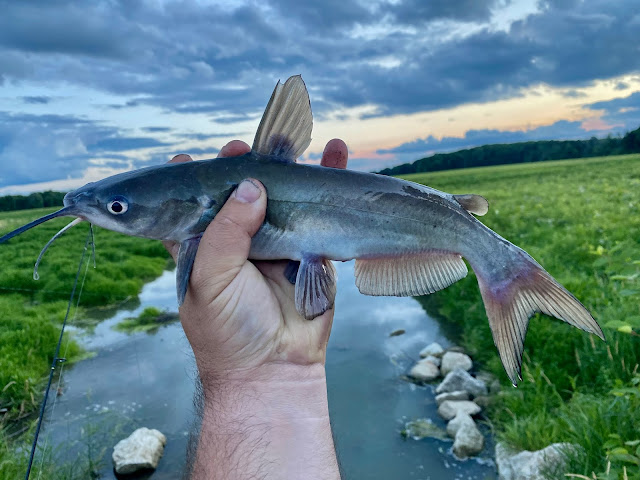 But wait, there's more! A few days later, I had another chance to get out fishing again. I couldn't decide if I should try to luck into more random stuff or go hit the spots that I tried on the first day. I went with the latter. I decided to try to get a bigger Bowfin, and a better picture, as I wasn't too happy with the results of the first day in that regard. I like to have at least one "good" picture of each species if possible. I went back to the first creek that was previously all high and muddy, and was pleased to find it much lower and much more fishable this time. I caught more Golden Shiners for bait, and almost dropped my rod in shock when I hooked up with a nice Bowfin almost immediately. For the next few hours, I was thoroughly entertained catching Bowfin after Bowfin. I didn't get any monsters, but some of them were easily 4-5 lbs, which I was perfectly happy with. And I even rounded out the day catching another new species of minnow, the Spotfin Shiner. And just like that Ohio went from a state where I had caught 0 new species, to 8. It is now tied for 5th place with Minnesota on my list behind Washington (50 new species), Idaho (29), Oregon (19), and Florida (11).