Catching a blue shark remains very near the top of my to do list, and it has been there for years. I've seen many of them on offshore charter trips, and I even got one to bite a live mackerel once, see this post for details on that one. The problem hasn't been finding them, but rather finding a charter boat that will fish for them, or even let you catch them when they show up.

One trip last summer to Coos Bay Oregon would take me at least to the ball park, if not provide a guaranteed home run. I always say you can't catch them if your hooks aren't in the water, so I'm always game to try even if the odds are long. I connected with Captain John from Sharky's Charters (I don't have a link, but he can be found via a quick facebook search if you're interested), who was open to the idea of shark fishing and has pictures posted of several that he's caught over the years. So I booked a trip. This was in August, so it was the middle of tuna fishing season there, but he said we could shark fish too if we saw any. Full disclosure, no sharks were harmed in the making of this post, but a great time was still had by all, and I highly recommend you give Captain John a call. The tuna fishing was lights out, and we used handlines (instead of rod and reel) to pull them in, which is apparently a much more efficient way to do it, and a blast to experience.

After being thoroughly worn out pulling on Tuna, and spotting no sharks at all, which is unusual for that kind of trip, we headed back for port. Then we came upon what to me was the best part of the trip. The captain slowed to take a closer look at what initially looked to be a large log floating low in the water. As we got closer though, it became clear that they were fins sticking out of the water! He eased the boat as close as he could before whatever was attached to the fins spooked and submerged. We were unsure what they were; definitely a group six or seven fish of some sort, but they didn't look like sharks or tunas. Swordfish had been spotted in the area periodically sunning themselves like that, but we just couldn't get a clear view and weren't sure. We did of course try casting all the lures and jigs we could think of, and I drug around a big strip of tuna meat on a long trailing line out the back, but they were not in a feeding mood. We repeated the scenario a dozen or so times over the next 45 minutes where we would approach as close as we could get, cast at them until they spooked, then wait for them to surface again, usually not too far off.

It wasn't until we saw one of them randomly jump out of the water that we realized what they were. They were Marlin! In Oregon! Certainly not unheard of as they are occasionally caught in Oregon and have even been caught farther north off the Washington coast. But this was certainly a new one for me! The pictures don't do them any justice at all as I just had my phone, but you can still see their fins sticking up.

After finishing an awesome (if sharkless) charter trip, I considered my game plan for a few extra target species. High on the wish list were a Rock Greenling and Calico Surfperch. First on the agenda was the greenling. I had internet-scouted potential spots near Coos Bay where I thought my chances were good. I had always drooled over Rock Greenling pictures with their big red spots and strange blue coloration mixed in. Also of note, I needed that one to complete what I was calling the "greenling slam", which was completed by catching all of the four greenlings in this part of the country: Kelp, Whitespotted, Painted, and Rock greenlings. Yes I made up the greenling slam, but I was still excited to complete it. Someone also pointed out that there is also a "Masked Greenling", but those are found farther north in British Columbia and Alaska, so I'm excluding them from this exercise (it's my own made-up game after all so I'm not above making up my own rules).

Anyway, I began fishing a nearby jetty, and found the experience generally underwhelming. I caught very few fish, which certainly could have been operator error, but the fish were few and far between. The few I did manage to catch were good ones though, and the first to come up was a small Sand Sole, which became species number 148!

After at least having broken the ice with a new species, I began to get restless. I had other spots I wanted to try for new surfperch species. But before leaving, I tried casting danger-close to the rocks, understanding that I would likely loose a few rigs to the rocks, but hoping it would up my chances for a Rock Greenling. I did in fact have to retie a couple times, but I eventually found some bites and the plan actually paid off! 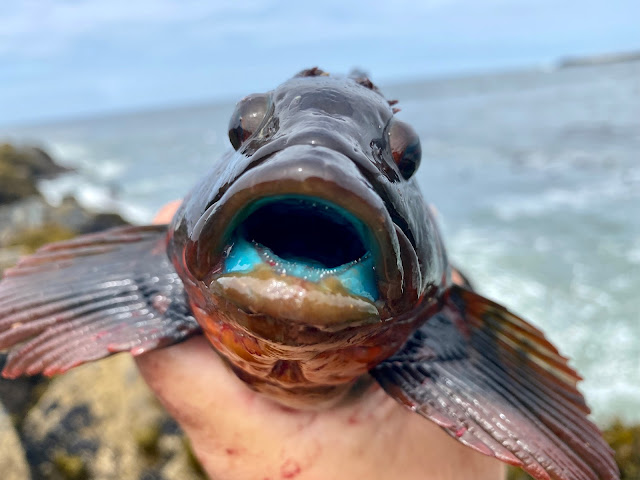 The Rock Greenling was a big one for me, but that's what makes this game fun; no matter how exciting the last fish was, there is always another one out there somewhere. So I headed farther south with high hopes of encountering a Calico Surfperch, with a fishing spot in mind generously shared by another species hunter, Luke Ovgard. Check out his blog https://caughtovgard.com/ for more species hunting adventures. It's a great read, and his species list is much larger than mine.

The Calico Surfperch were elusive, but as is often the case, I caught plenty of Striped Surfperch, which were hard to catch for years, until I caught that elusive first one. Now they're everywhere.

I didn't have time this trip to venture into California like I wanted to due to a variety of things going on back home, not the least of which being a wildfire which had gotten uncomfortably close to our town, and had almost canceled my trip all-together. But I was painfully aware of the dozens of species calling my name farther south in the Golden State. The Leopard Sharks and Bat Rays will have to wait till another time. Not to mention the Blue Sharks that were the whole point of the trip to begin with. But I'm not going to complain about a cooler full of tuna fillets, two new species, and a finally completed (even if made-up) greenling slam!

Email ThisBlogThis!Share to TwitterShare to FacebookShare to Pinterest
Labels: NewSpecies, Other, SaltyWater