Day three dawned and we headed out again into the weirdly urban but still wild wilds of south Florida. The plan was to check a variety of canals for a mix of fresh and saltwater species. Our first stop was some sort of diversion dam on a certain canal. Fishing was a bust here except that we could see a large group of mullet schooled up right below the dam. We both tried everything we could think of to get them to bite: worms, corn, artificial baits, bread, bugs, all the lures, etc., with nothing to show for our efforts. Then I finally got what I thought was a little nibble on a tiny bread ball on a sabiki rig. So I stuck with that strategy, and tried not to be bothered by the literal hundreds of fish actively ignoring my offerings for the last 45 minutes. It's one thing when fishing is tough because the fish are hard to find. It's another thing altogether when you're clearly watching hundreds of fish and they're going out of their way to swim around your bait. It's just hurtful at that point. But then one curious fish finally made a mistake and after a short but spirited fight, I pulled in one of the more difficult species I would add to the list on this trip, the Striped Mullet.

Our next stop was my best shot at one of my top targets of the trip, the peacock bass. However that one was not to be. We struggled to get anything at all going in freshwater, so back to the saltwater spots we went, and the next one ended up being a short stop but one of my favorites of the trip.

My first big catch at this spot was one I was particularly excited about: a wild coconut. Now that might sound weird, but for a guy like me raised in the frozen north, a coconut is pretty exotic!

Besides coconuts and lizards, we did also catch some fish at this spot as well.

Bret and I had both been catching pretty much the same species at this spot. We did see a small Nurse Shark swim by, not that we could do anything about it at the time. But for the most part the new species had slowed down by this point, and we were considering moving on. Then he spotted what I'm going to call my favorite fish of the trip. It took a few tries, but this oddity finally ate his piece of shrimp and was hooked! The Scrawled Cowfish has a hard "shell" around most of it's body, and horns like a cow. It was definitely one of the weirdest fish I've seen to date. I was glad to see that one, and only somewhat jealous that I didn't catch one of my own.

Bret even got some video of this weirdo fish. It's towards the end of the video below. If you haven't already checked out his channel Peeling Line, you should do that too.

The last daytime spot resulted in three more mojarra species, which were cool, but certainly not Scrawled Cowfish cool.

I also enjoyed making friends with some local wildlife at this spot. These pelicans were anything but shy, and they loved a good game of catch, as long as what was being thrown was a fish. Though now that I think about it, they never did throw one back to me, so now I'm questioning if we were actually even friends at all. 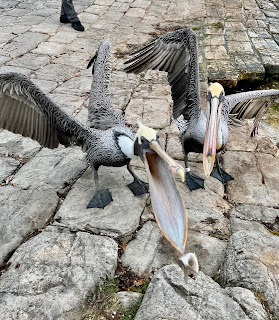 For our last evening, we went back to the catfish spot from the previous night and drowned more worms. The first participant of the evening was a Coppernose Bluegill, not a new species as it still counts as a Bluegill (which was species number one for me actually). This one does still go on the spreadsheet though, just on the subspecies tab. Oh come on, your spreadsheet has a subspecies tab too, don't pretend it doesn't.

Forty species was within reach, but time was running out. I patrolled the shorelines with my headlamp looking for potential new ones. I kept seeing little striped fish sitting on the bottom near the shore, but they either immediately spooked or would not bite. We were out of time though so I decided to just badger one of the slower ones until it got mad. So I bumped this little fish in the face with a piece of worm until it was aggravated enough to bite. Am I proud of this? A little bit actually. Should I be? Probably not, but it got me a species, so I'm good with it.

The tally was at 39 species on the trip, and my list sat at 189. The clock had run out though, so although 40 is a much more round and satisfying number, it wasn't going to happen. My OCD has since made peace with this fact. Kind of. I am certainly not complaining though. Thirty nine species in one trip is phenomenal and by far my personal record and a score that I doubt I'm likely to beat any time soon. In fact, if I add up all the new species I added to my list from 2018 to 2021, it still doesn't add up to 39, so it really was a drink from a fire hose kind of a trip. And it was a blast to have someone else there to geek out over weird obscure fish species with.

Email ThisBlogThis!Share to TwitterShare to FacebookShare to Pinterest
Labels: NewSpecies, Other, SaltyWater